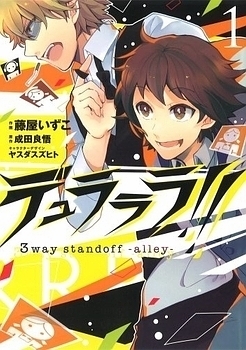 Description
Miyoshi Yoshimune (nickname: Yoshi-Yoshi) just moved to Ikebukuro because of his parentsâ€™ work. While exploring his new town with his classmates, Mikado, Anri, and Kida, he hears rumors about â€œThe Headless Riderâ€* and â€œColor Gangs.â€* While chasing after these rumors, he gets dragged into a conspiracy involving the whole of Ikebukuroâ€¦

Adapted from the PSP game of the same name focusing on a new original character.