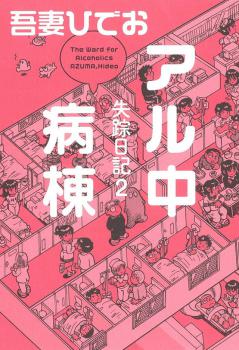 Description
An autobiographical work in which Hideo Azuma tells the story of his inability to cope with the pressures of his job as a mangaka and of his exeriences with alcoholism. The work is split into three sections, each of which details one of Azuma's breakdowns. The first section (Walking At Night) is set in 1989 when Azuma suddenly walked out on both his job and his family and became homeless for the first time. Much of this section is given over to describing the practicalities of eating, sleeping, and killing time whilst homeless. The second section (Walking Around Town) covers a similar set of events in 1992 but this time Azuma managed to find labouring work as a gas pipe layer after a period of living rough. This section also looks back over Azuma's career and describes the pressures he worked under in the 1970s and 80s. The third section (Alcoholic Ward) covers the author's descent into full-blown alcoholism and his experiences of being committed to a hospital rehab programme in 1998.

Note: Won the Tezuka Osamu Cultural Grand Prize in 1997.
Shissou Nikki 2 was released on 2013, eight years after the original.