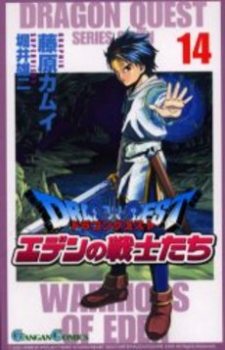 Status in Country of Origin
14 Volumes (On Hiatus)

Description
From Dragon Quest Shrine
Warriors of Eden follows the story of Dragon Quest VII with a few new touches. Arus along with Keifer and Maribell discover an ancient temple on Estard Island. In the temple they discover tablets that allows them to travel to continents that were sealed away in the past and are revived in the future. Warriors of Eden now adds an elemental warrior with each elemental spirit, starting off with Arus as the Warrior of Water. Fujiwara also ties Warriors of Eden with the Roto series with a character named Bezul. He's the reincarnation of Emblem of Roto's Quadal, a sage who fought with Roto during the final battle with Zoma. His apprentice, Guren, is the Warrior of Fire. And, on top of all that, Arus' lizard is named Gregory and now speaks.